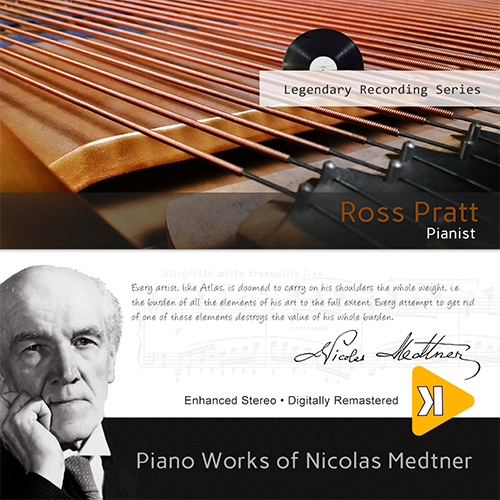 Nikolai Karlovich Medtner (24 December 1879 – 13 November 1951) was a Russian composer and pianist. A younger contemporary of Sergei Rachmaninoff and Alexander Scriabin, he wrote a substantial number of compositions, all of which include the piano.

Awarded a scholarship to the RAM, London, he studied 1934-9 with Harold Craxton and in 1939 made his London recital debut at Wigmore Hall and was soloist with the BBC SO under Sir Henry Wood. On his return to Canada Pratt settled in Montreal, giving recitals and appearing with orchestras throughout North America.

This production has been remastered using Advanced Forensic Audio Restoration Technology from the original source. The end result is a revitalized audio rendition featuring simulated stereo of audiophile quality.

We have made a significant effort in maintaining the original musical dynamics and sound color spectrum of the original source, with emphasis on modern sound standards.